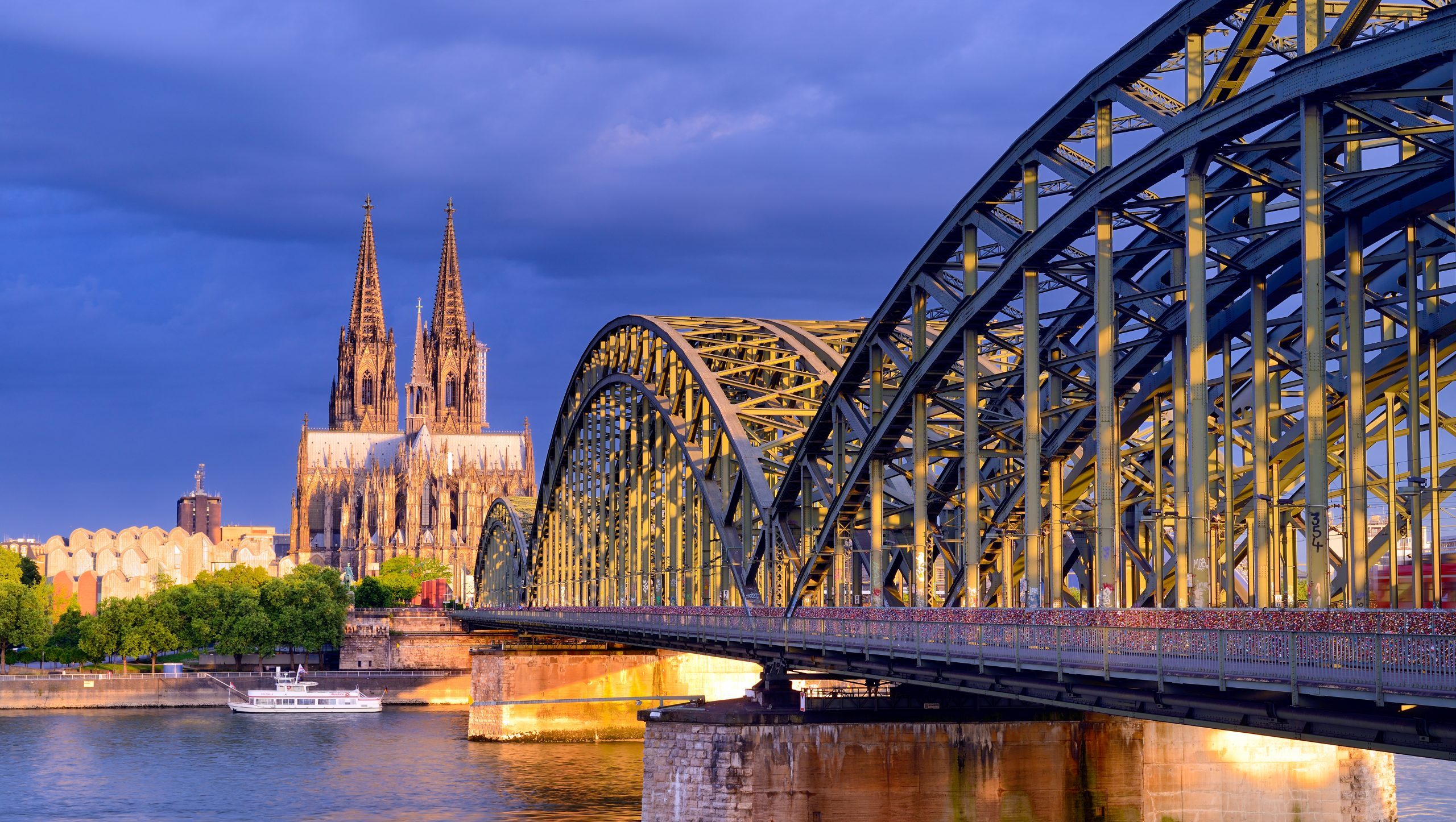 Whether street music on the Hohe Strasse or galas in the modern opera house, whether pavement painting on the cathedral concourse or old masters in the Wallraf Richartz Museum, whether the annual music festival along the inner ring road or carnival in the entire city – in Cologne all this becomes synthesized into a vivacious work of art – in a cosmopolitan metropolis boasting more than a million inhabitants which, despite its size, has never lost its neighbourly character.

Cologne is the ideal city for international meetings and conferences, being connected to two international airports: Düsseldorf (DUS) and Köln-Bonn (CGN)

Cologne is also easy to reach by train or coach from the neighbouring countries of the Netherlands, Belgium, Luxembourg and France. It is thus a popular meeting point for events with environmental themes or sustainable events, starting with the means of transport that meeting participants are able to use to get to Cologne.

Let yourself inspire by the sheer joie de vivre that Rhenish inhabitants retain throughout the year – not only at carnival time. Cologne is awaiting you with the large fairground at koelnmesse, the well-known Lanxess Arena and lots of optimistic people who will welcome you with open arms.

And what about carnival?

Carnival is not only celebrated in Rio de Janeiro or New Orleans. No, also us here in Germany we have a long standing carnival tradition – however for some reason almost unknown to the rest of the world. The biggest celebrations are being held in the formerly French influenced cities along the Rhine – Mainz, Düsseldorf and on top of all, in Cologne.

We always joke: At the Oktoberfest in Munich it’s only a square which is partying. In Cologne it’s the whole city!

Traditionally, the „fifth season“ (carnival season) is declared open at 11 minutes past 11 on the 11th of the 11th month November. The Carnival spirit is then temporarily suspended during the Advent and Christmas period, and picks up again in earnest after 6 January (Biblical Magi) in the New Year. The time of merrymaking in the streets is officially declared open at downtown square Alter Markt on the Thursday before the beginning of Lent. Street carnival, a week-long street festival, also called „the crazy days“, takes place between Fat Thursday (Weiberfastnacht) and Ash Wednesday (Aschermittwoch). The highlight of carnival is Rose Monday (Rosenmontag), two days before Ash Wednesday. All through these days, Cologne folks go out masqueraded. The typical greeting during the festival is Kölle Alaaf!, a Kölsch phrase.

Cologne’s Rose Monday carnival parade is an unforgettable experience for the visitor, especially when you see up close how over 10,000 people throw tons of “Kamelle und Strüßcher”  (sweets and flowers) from the floats to the revelling crowds. Along the seven-kilometre route of the parade you can find many places that serve as good viewing spots. But there are also several grandstands, which are a great chance to experience the parade in an even more relaxed manner and see all the details of the special satirical floats full-size.